I’ve seen this movie couple of times. At first I thought it was not that good, but then when I watched it again yesterday i fell in love with the characters. I mean the guy is really gorgeous and the place also looks lovely.

Amy Adams is as appealing as ever, but her charms aren’t enough to keep Leap Year from succumbing to an overabundance of clichés and an unfunny script.source:Rotten Tomatoes

Leap Year is a 2010 American romantic comedy film directed by Anand Tucker. The film, which stars Amy Adams and Matthew Goode, premiered in New York City on January 6, 2010. The story is about A woman who has an elaborate scheme to propose to her boyfriend on Leap Day, an Irish tradition which occurs every time the date February 29 rolls around, faces a major setback when bad weather threatens to derail her planned trip to Dublin. With the help of an innkeeper, however, her cross-country odyssey just might result in her getting engaged. 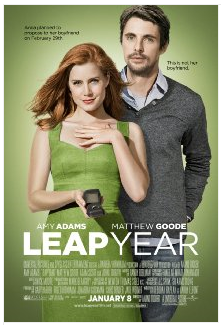 When their four—year anniversary passes without a marriage proposal, Anna (Amy Adams) decides to take matters into her own hands. Investing in an Irish tradition that allows women to propose to men on February 29th, Anna decides to follow her boyfriend Jeremy (Adam Scott) to Dublin and get down on one knee herself. But airplanes, weather and fate leave Anna stranded on the other side of Ireland, and she must enlist the help of handsome and surly Declan (Matthew Goode) to get her across the country. As Anna and Declan bicker across the Emerald Isle, they discover that the road to love can take you to very unexpected places.