Have you seen the movie Salt? I think this was the latest action movie of Angelina Jolie, with other stars Liev Schreiber and Chiwetel Ejiofor. If you enjoy the action in the Tomb Rider series, you will surely enjoy this super intense full pack action, nerve wracking stunts and of course woman power I’ve waited to watch. SALT was a shown of theater last 7/23/2010 and it was the latest movie presentation in Starz channel last Saturday. 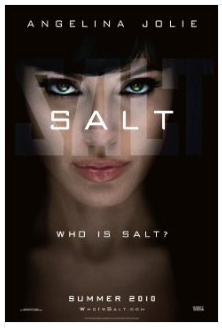 A CIA agent goes on the run after a defector accuses her of being a Russian spy.

The think I like about the movie was the suspense and thrill. You will guess who are the leader and ask the question of who she was working for. Although there are some missing pieces in the movie and the ending was kind of lame. But the action was indeed awesome considering that she is a woman.
Watch the Official SALT Trailer from Youtube.

Synopsis: As a CIA officer, Evelyn Salt (Jolie) swore an oath to duty, honor and country. Her loyalty will be tested when a defector accuses her of being a Russian spy. Salt goes on the run, using all her skills and years of experience as a covert operative to elude capture. Salt’s efforts to prove her innocence only serve to cast doubt on her motives, as the hunt to uncover the truth behind her identity continues and the question remains: “Who Is Salt?”– (C) Source from Rotten Tomatoes