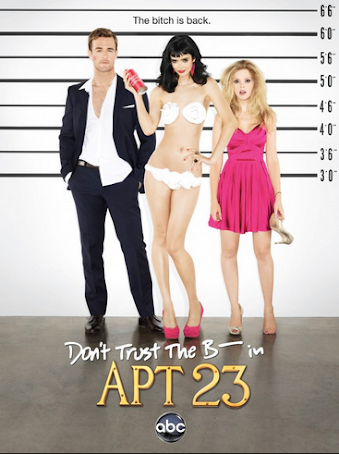 Don’t Trust the B—- in Apartment 23 is an American sitcom aired on from 2012–2013. The show was played by Krysten Ritter as Chloe, Dreama Walker as June and James Van Der Beek with other casts Michael Blaiklock, Eric André, Ray Ford and Liza Lapira and Nahnatchka Khan as the creator of the show. This shows is about Chloe a New York party girl with the morals of a pirate who bullies and causes trouble for her naive small town roommate June.

After Midwesterner June moves to Manhattan and finds her dreams of city living dashed, her hopes are punctured further when she’s swindled by her roommate, Chloe. Much to Chloe’s surprise, June turns the tables, and a beautiful friendship begins.

After its 2nd season the show got cancelled. In season 1 there are 11 episodes while season 2 had 15 episodes. I sure want more of this witty and quirky humor comedy shows. The casts were amazing and adding James Van Der Beek was a great thing and he was hilarious. I had a good laugh and although some of the words are kind of inappropriate. I ran out of great TV shows to watch and I’ve seen some clips of this shows. I couldn’t catch this show on TV and thankfully Netflix added this show to the list. Befinitely one of the funniest show by far that I have watched recently. There are a few shows I watch and stick around to watch the whole thing. You should watch it and have a good LOL. It has the most consistently funniest comedy sit-com you will ever see read more.