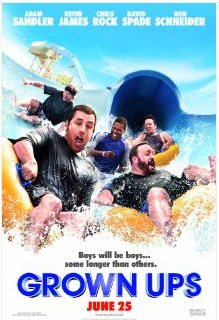 I had been waiting for this movie to be shown on either HBO or Starz. Well, the long awaited movie had finally out on Starz tonight but I watched it in advance this morning through Starz On Demand. I find the movie funny and hilarious. This movie Grown Ups proves that boys never really grow up thus in the movie Adam Sandler wanted his kids to grow up like normal boys and have fun the way he had enjoyed his childhood. Each of the families had their perks, and secrets which later on able let it out in the open. Some movie critic may say that it’s not so funny but I agree not. I had good laughs in the movie and for me it’s worth watching.

Genre: Comedy
Cast: Adam Sandler, Kevin James, Chris Rock, David Spade, Rob Schneider, Salma Hayek
Synopsis:
Grown Ups is a story of five men who were best friends when they were young kids. After their high school basketball coach passes away, five good friends and former teammates reunite for a Fourth of July holiday weekend to meet each others’ families for the first time. Read the Movie Review