I have seen the Karate Kid 1,2 and 3 with Mr. Miyagi and Daniel Sang i i like it. I Have seen the trailer on TV only and been waiting to be shown on HBO or Starz. Finally it came out on Starz and I got the chance to watching Karate Kid (Kung Fu Kid) today at Starz Channel. It’s awesome. I am a huge fan of Jackie Chan and he did a great job in his role as Mr. Han. Jaden Smith as Dre Parker the new karate kid was amazing in his character. The story revolves around Dre Parker who was force to move to China because of work opportunity for his Mom as single parent. In his new home, the boy embraces Kung Fu taught to him by a master. He had to fight against this group of kids who have been beaten him up with their kung fu expertise. It was a very good movie, you should watch. I’ll watch this movie again on Starz. 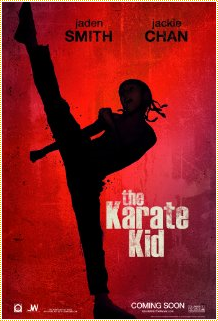