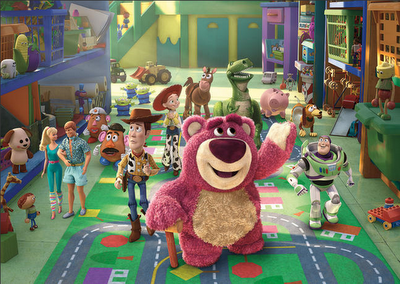 Toy Story 3 is a 2010 American 3D computer-animated film. It is the third feature-length film in the Toy Story series.The plot focuses on the adventures of Woody, Buzz Lightyear, and other toys dealing with an uncertain future as their owner prepares to leave for college.

The third (and presumably final) installment of Pixar’s beloved franchise sits firmly at the top of the toy chest as the highest grossing film of 2010, nabbing the unstoppable animation studio its biggest hit yet.

Let’s look back on the previous Toy Story through the video i got from youTube.

Toy Story 2 is a 1999 sequel to Toy Story, which features the adventures of a group of toys that come to life when humans are not around to see them.


After my son watched the Toy Story 1. he asked for more. Good thing the Toy Story 2 was upnext. he love the talking toys and its adventure. He even collected the characters that he had from his toy chest.

Toy Story follows a group of toys who pretend to be lifeless whenever humans are present, and focuses on Woody, a pull-string cowboy doll (Hanks), and Buzz Lightyear, an astronaut action figure (Allen).

Toy Story went on to earn over $191 million in the United States and Canada during its initial theatrical release and took in more than $361 million worldwide.


Toy Story is a 1995 American computer-animated film, the first Disney/Pixar film to be made, as well as the first feature film to be made entirely with CGI. Directed by John Lasseter and featuring the voices of Tom Hanks and Tim Allen, and was distributed by Walt Disney Pictures.
EntertainmentToy Story
Previous Post Next Post