Movie Teaser Trailer: I Am No. 4

The first full-length trailer for the film just came out. Check it out below:

Is ‘I Am No. 4’ the Next ‘Twilight’? The folks at DreamWorks are clearly hoping that impatient twi-hards will flock to see “I Am Number Four” with the same obsessive zeal as they did with Stephanie Meyer’s tales. It remains to be seen if the movie will be a hit, much less a box-office favorite franchise on par with “Twilight,” but clearly the titans of Hollywood are betting on Number 4.

“I Am Number Four” opens everywhere on February 18.

The movie is about an alien who happens to take the form of a young, golden-haired hunk played by Alex Pettyfer. While his sequentially-numbered brethren have been knocked off by a shadowy band of Nosferatu-like villains in exotic locations like Malaysia and Kenya, Four has holed up in America’s heartland. There he attends high school; falls for Sarah, a young lass with great teeth; and tries to not look like an alien. That latter part proves to be difficult when his extraterrestrial powers, like lightning shooting out of his hands, begin to manifest. As the bad guys start to close in, in steps Number Six, who just happens to look a lot like Four’s high school sweetheart except with superpowers and with handy sword skills.

The movie is based on the first of a reportedly six-part series co-authored by none other than disgraced memoirist and Oprah-foe James Frey along with Jobie Hughes. Hollywood was interested in the novel even before it was published. Michael Bay brought the manuscript to Steven Spielberg who quickly optioned it. Both A-list filmmakers are producers for the flick. Bay protégé D.J. Caruso, who helmed “Disturbia” and “Eagle Eye,” directs. That’s a lot of Tinsel town clout behind a book that hasn’t proved itself in the marketplace. 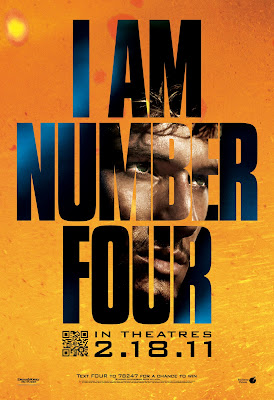 An extraordinary young man, John Smith, is a fugitive on the run from ruthless enemies sent to destroy him. Changing his identity, moving from town to town with his guardian Henri, John is always the new kid with no ties to his past. In the small Ohio town he now calls home, John encounters unexpected, life-changing events — his first love, powerful new abilities and a connection to the others who share his incredible destiny.
Also Known As: I Am Number 4
Production Status: In Production/Awaiting Release
Logline: A group of nine alien teenagers, having escaped the destruction of their home planet, are hunted on Earth by a hostile species.
Genres: Science Fiction/Fantasy and Adaptation
Release Date: February 18th, 2011 (wide)
Distributors: DreamWorks Studios
Production Co.: Bay Films
Studios: DreamWorks Studios
Filming Locations: Pittsburgh, Pennsylvania, USA
Produced in: United States
source:movies.yahoo.com
Previous Post Next Post